Yesterday I spoke at the Centre of Computational Biology at Birmingham University. I was invited to give a talk as part of their research seminar series about the work I have been doing on metagenomes. The lead up to this has been pretty nerve-wracking as this was my first talk outside of Aberystwyth (since my short introductory talk at KU Leuven last year), and the majority of my previous talks have been to my peers, which I find to be a lot less intimidating than a room full of experts of various fields.

En route to @UoB_CCB to shout about why metagenomes are so hard pic.twitter.com/wftx6sUhWV

I submitted the current working title of my PhD: “Extracting exciting exploitable enzymes from massive metagenomes“, which I think is a rather catchy summary of what I’m working on here. I borrowed the opening slides from my previous talks (this is a cow…) but felt like I needed to try a new explanation of why the metagenome is so difficult to work with. Previously, I’ve described the problem with jigsaw puzzles: i.e. consider many distinct (but visually similar) jigsaws, mixed together (with duplicate and missing pieces). Whilst this is a nice, accessible description that appears to serve well, it tends to leave some listeners confused about my objective, particularly:

A common analogy for genomic assembly is that of pages shredded from a book. I’ve also previously pitched this at a talk to try and explain metagenomic assembly, but this has some disastrous metaphorical pitfalls too:

Additionally, both analogies fail to explain:

Machines and Factories: A new metaphor?

So, I spent some time iterating over many ideas and came up with a new concept of “genes as machines” and “genomes as factories”:

Consider a gene as a physical machine. It’s configuration is set by altering the state of its switches. The configuration of a machine is akin to a sequence of DNA. It is possible (and even intended) that the machine can be configured in many different ways by changing the state of its switches (like gene variants), but it is still the same machine (the same gene). This is an important concept because we want to describe that a machine can have many configurations (that can do nothing, improve performance, or even break it), whilst still remaining the same machine (i.e. a variant of a gene). 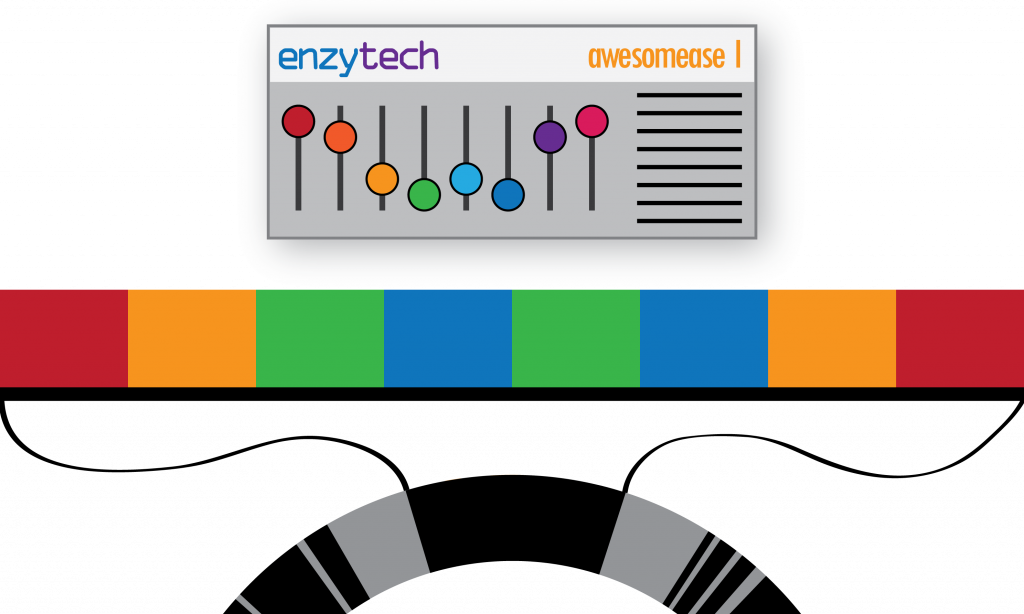 We can consider a genome as a factory, holding a collection of machines and their configurations: 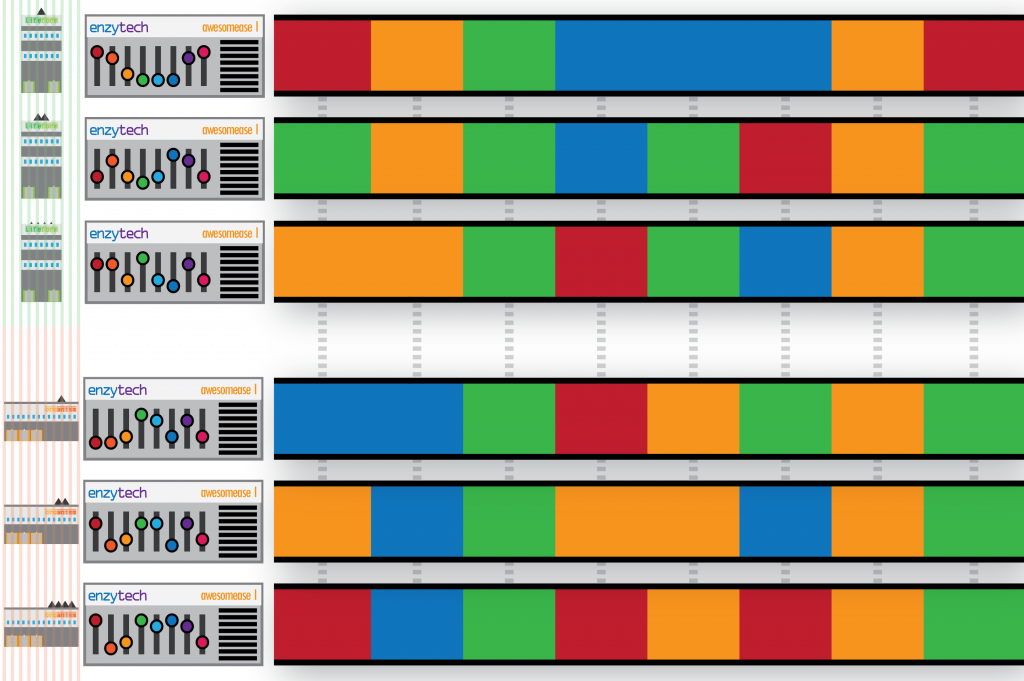 Armed with my shiny diagrams and apprehension of my own new metaphor, I pitched it to my listeners as a test and thanked them for their role as guinea pigs to my new attempt at explaining the core concept of the metagenome and its problems.

In general, I felt like the audience followed along with the metaphor to begin with. Given a fictional company: Enzytech and their machine: Awesomease, we could define the metahaplome as the collection of configurations of that Enzytech Awesomease product across multiple factories, under various parent companes (i.e. different genomes, of varying species). However I think the story unravelled when I described the process of actually recovering the metahaplome. 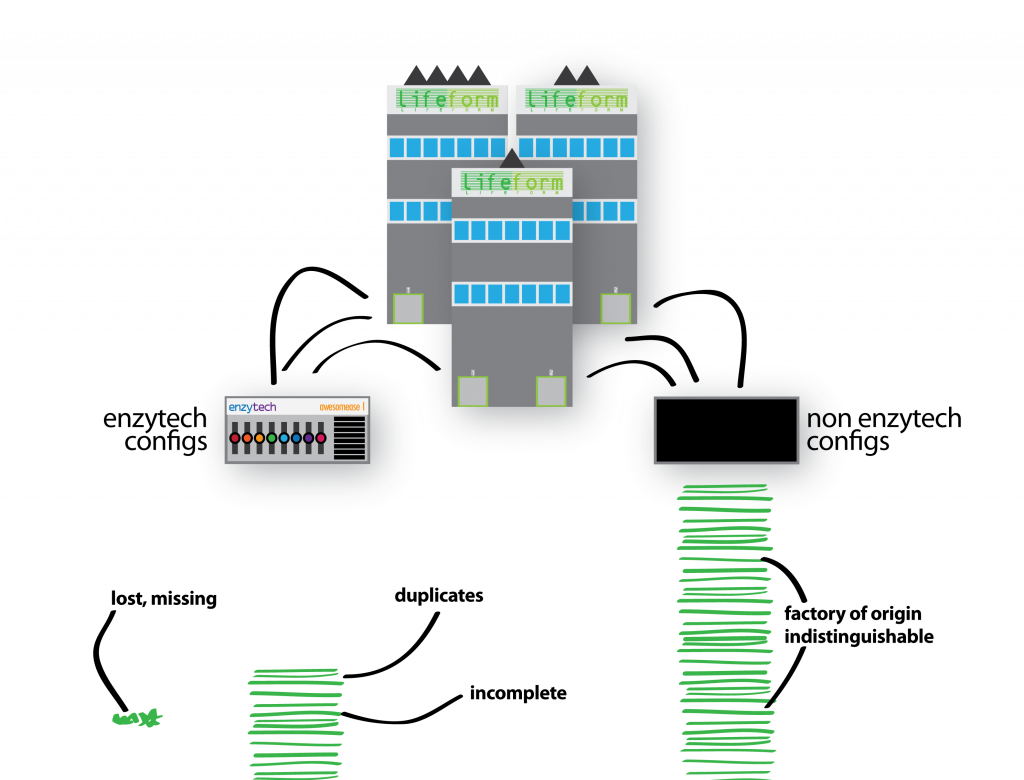 To make matters worse, the configurations don’t describe the specific factory they are from (i.e. the individual organism), and their returned documents also include incomplete, broken and duplicated configurations. Lost configurations are not submitted.

I think at this point, I was getting too wrapped up in the metaphor and its story. The concept of metaphorical factories submitting bad paperwork to fictional Sam from Enzytech did not have an obvious biological reference point (it was supposed to describe metagenomic sampling). I think with practice, I could deliver this part better such that my audience understands the relevance to biology, but I am not sure it is necessary. Where things definitely did not work was this slide: 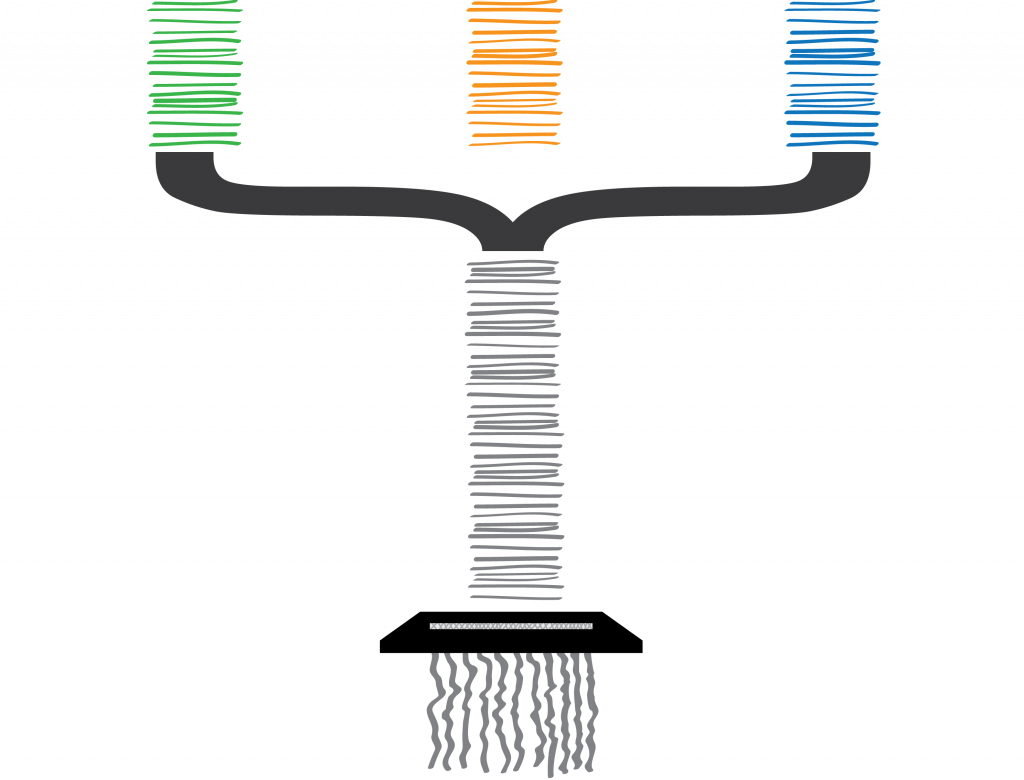 “Unfortunately, an Enzytech intern misfiled the paperwork submitted by all of the parent companies’ factories (species and their various genomes), and we could no longer determine which company submitted which configuration. The same clumsy intern then accidentally shredded all of the configurations, too.”

Welp. I am somewhat cringing at the amount of biological shoehorning going on in just one slide. Here I wanted to explain that although my pretty pictures have helpful colour coding for each of the companies (species), we don’t have this in our data. A configuration (gene variant) could come from any factory (genome) in our sample, and there is no way of differentiating them. Although shredding is a (common) reference to short-read sequencing technology, the delivery of this slide feels as clumsy as the Enzytech intern. I think the mistake I have made here was trying to use the same metaphorical explanation for two separate and distinct problems that I face in my work on metagenomes:

On this occasion, I believe I managed to explain the metahaplome more clearly to an audience than ever before, though this might be in part because this is my first talk since our pre-print. However, in forcing my new metaphor onto the latter problem (of sequencing), I think I inadvertently convoluted what the metagenome is. So ultimately, I’m not entirely convinced the new metaphor panned out with a mixed audience of expert computer scientists and biologists. That said, I had several excellent questions following the talk, that seemed to imply a deep understanding of the work I presented, so hooray! Regardless of whether I deploy it for my next talk, I think it will still prove a nice way to explain my work to the public at large (who may have no frame of reference to get confused with).

I enjoyed the opportunity to visit somewhere new and speak about my work, especially as my first invited talk outside of Aberystwyth. This is also a reminder that even sharing thoughts and progress on cross-discipline work is hard. It’s a lot of work to come up with a way to get everyone in the audience on the same page; capable of speaking the same language (biological, mathematical and computational terminology) and also give the necessary background knowledge (genomic sequencing and metagenomes) to even begin to pitch the novelty and importance of our own work.